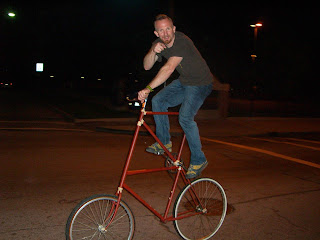 "Here is the interview from my 'Zine entry, Kitchen Sink. It was probably too long for a zine but fits right in here, which is where it was originally supposed to be" Socal.

Scotty Powell is part-owner of the Chenga Skateparks in Ohio, a world traveler, an awesome flatland rider and a good friend. From cliff jumping in Lake Mead to Philly Tits in Waikiki, you never know where you'll end up when you're out with him. He took some time to answer some questions for the Shootsbrah site...

1. How long have you been riding? 21-1/2 Years.
2. How does a self-professed "flatland" rider get involved with an indoor park? Because in 1995, winter was coming and we were over it. Something had to be done. We thought about it and were faced with 2 choices…1) Move to Arizona and ride all winter with Chase, Chad D, Trevor, Paul O, and others…or 2) Start our own skate park so that we could avoid the cold & snow of winter, and parking garages. We decided that we were gonna go for it, but on one condition that we promised ourselves…the park MUST have a flatland area! And we were off on our quest to find a building for our skate park!
3. How are things going at Chenga? Up and down. We just opened (moved the original park) and due to about 50 circumstances that were way out of our control, we officially opened Chenga 57 at the worst possible time of year for a park. We have been building steadily and now that winter is just starting I think we will be fine!
4. Where did the term/name Chenga come from? What do you mean!? ( Ed. Note. Scotty and I have talked about this. It turns out that at about the age fifteen, they just started using different made-up words. It turned into the Chenga Boys and there you have it.)
5. You and Kevin (Jones) were part owners of Dividual. What happened with that? The frame builder (located in Oceanside, Ca.) was offered a job from Subway (sandwiches) to build chip racks for their shops. Since it was way easier to do and made a ton more cash, he decided to quit making frames for all of his clients. Then Kevin and I decided that since the business took a bunch of time and really never amounted to any substantial cash flow (and we had the frames we wanted for ourselves), that we would be better off just ending it. We did so at a point in time when we were almost sold out of everything that we made too!
6. What are you riding now? I had the same frame builder make me 2 custom frames, a slight bit different than the ones we sold. I have a chrome bike (with front and back brakes) and the Van Halen bike with front brake only!
7. You travel quite a bit. What has been your favorite destination? I try to have fun and enjoy my trips no matter where I go…well, doesn't everyone!? Anyways, I can think of many different aspects of many of my trips that I hold dear…for example:
La Jolla,Ca. Sitting on the edge of a cliff overlooking the crashing waves. Sea lions were below me barking away as I stood looking down on them and around. All around were like 40 pelicans swirling around me.
Off the cut, Panama walking along a virgin beach for about an hour, looking around and noticing that I was totally alone in this paradise, no job, no pressure, no worries, nobody!
Manual Antonio, Costa Rica. Having the monkeys eating right out of my hand! Literally!
Hanauma Bay, Oahu. Chill with a sea turtle. For about 10 minutes just me and the turtle chilled together. Once he became bored, he left!
Volcano Park, Hawaii. Going out to see the lava flow into the ocean; at one point Nate (Wessell) and I looked down and looked through the cracks in the ground, realizing that we were standing about 10 feet above flowing lava!!
I have tons more, but you didn't look at this to read a book!
8. You just got involved with a new endeavor. What's up with Chenga Travel? My aunt has been a travel agent for 20+ years, so I know a bit about that business. And with the internet heavily involved with the evolution of travel, she helped me create my own travel site! Since I know (from riding) sooooo many people and all they do is travel all year round it made perfect sense to start a site where riders could book their travel! Not only can you book air tickets but hotels, car rentals, cruises, golf trips, special event tickets, and flowers too on the site. It works really well and is simple to use! Why give Expedia your money when you can support someone in the riding scene!!??
Also...there are awesome opportunities for anyone else to start their own travel site too. Just email me and let me know if you are interested in a 2nd source of income! www.chengatravel.com
9. Any last words? I'll be seeing everyone in Hawaii real soon and if you are on the mainland, look me up! Shooooooots! 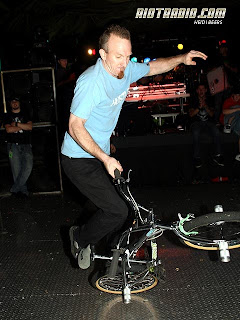